The South Carolina State Bulldogs smashed, outsmarted and shocked Jackson State with a 31-10 win Saturday afternoon. They left many people stunned with their performance in the Celebration Bowl.

“At first they said we wouldn’t score 21 points,” Bulldogs wide receiver Shaquan Davis said, according to USA Today’s Jarrett Bell. “We had to come out and prove them wrong.”

Davis won Offensive Most Valuable Player of the game, with five catches for 95 yards and a Celebration Bowl record three touchdowns.

Jackson State hadn’t given up two touchdowns per game all season long. They gave up ten points in the first half.

The first half was an offensive struggle between the MEAC and SWAC Champions. Bulldogs quarterback Corey Fields Jr. struggled with a stingy Tigers’ defense. He forced passes, and threw an interception to Tigers’ cornerback Shilo Sanders. He was 0-4 in his first few passes.

Travis Hunter, No. 1 Player in the Class of 2022 Commits To Jackson State

Tigers’ quarterback Sheduer Sanders found Keith Corban lll for the first score of the game, with 7:24 in the first quarter.

It would be their only touchdown of the afternoon.

Jackson State often moved the ball early, but usually settled for three and outs in the first half.

South Carolina State’s defense held the Tigers in check for the offense to strike in second quarter. Fields found Davis from six yards out, tying the game at 7.

Sanders fumbled the ball in the second quarter, after being sacked by SCSU’s Patrick Godbolt. It was a turning point in the game.

A field goal from Gayvn Zimmerman gave the Bulldogs at 10-7 lead at halftime.

From there, the Bulldogs pounced the favored Tigers.

The defense mauled Sheduer Sanders, forcing two more turnovers in the second half.

Each one provided a short field to pay dirt.

Another Tigers’ turnover put the Bulldogs in position for another score. This time, Fields would find Richard Bailer for a 15-yard touchdown, making the score 24-7.

The finish was academic from that point on. Another touchdown from the Bulldogs and a field goal from Jackson State made to final score 31-10.

“South Carolina State kicked our butts in every way and every fashion,” Deion Sanders said to Jean-Jacques Taylor of The Undefeated. “I feel we were overconfident and overlooked them as if they were going to hand us the game.”

“I sensed it during the game,” Deion Sanders said. “We were a little lackadaisical. We had that fire in the locker room before the game because we turn up, but there was just something missing, and when I looked in their eyes, something was missing.”

For South Carolina State head coach Oliver “Buddy” Pough, it is a satisfying finish as the underdog. 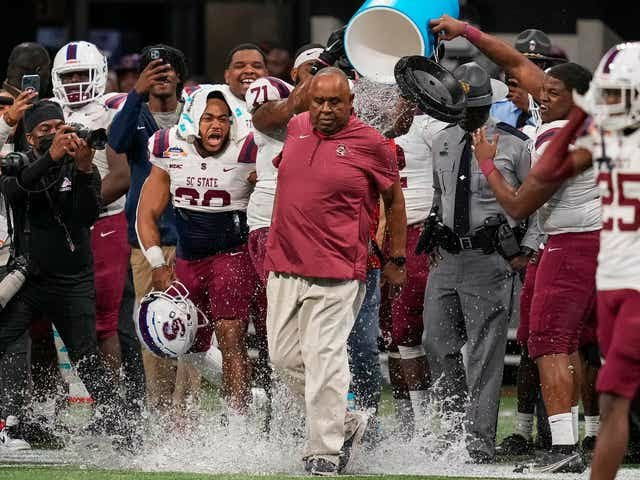 “It was a wonderful win for us,” Pough said , according to Mia Berry of The Undefeated. “It was a lot of fun. To have won the game earlier in the game and be able to stand there for the last maybe 10 or so minutes of the game and not be stressed … was awfully special. I got a chance to look and see the stands, that kind of stuff. It was fun watching as the game was winding down.

For Jackson State, there’s still work to be done after an incredible 11-win season.

They ran for 74 yards on 29 carries in addition to the turnovers. There were breakdowns in the offensive line, consistent with the regular season. That led to pressure on Sheduer Sanders and turnover for the Jackson State offense.

“Me just not seeing it and making the right reads to get the ball out of my hands,” Sanders said of the S.C. State defense, according to Mia Berry of The Undefeated.

It is back to the drawing board for the SWAC Champions.

For South Carolina State, they went old school: smash mouth defense, which led to an explosion on offense. They were focused, ready and executed their game plan to a T.

And they are they 2021 Cricket Celebration Bowl Champions.

HBCUGO.TV... The Leading Media Provider for the
105 HBCU'S.

Stream HBCUGO.TV programs and content on your TV with ROKU!
Learn more